"there is no mony in health, but there is plenty in illness"

Lori Gregory and Dr. Kristin Comella, world-renowned expert on regenerative medicine using a patient’s own stem cells join to talk about the federal government’s unprecedented attempt to regulate our bodies. This new treatment holds amazing potential, which is why government & industry want to control your body, your healthcare, your informed choice and your liberty. 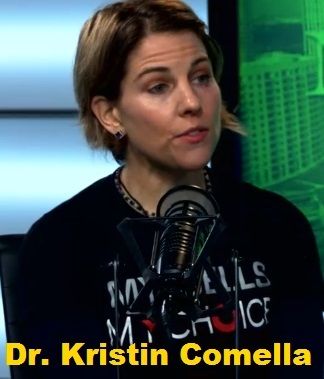 YOUR BODY IS NOT A DRUG

On May 9th, the U.S. Department of Justice (DOJ) filed a lawsuit at the request of the U.S. Food and Drug Administration (FDA) against stem cell clinics currently performing surgical procedures involving autologous adipose tissue.

According to the FDA and the DOJ, even if this procedure is in the patient’s best interest and can improve their quality of life, they are no longer legally allowed to undergo such treatment.

If the FDA prevails in its attempt to stop physicians in the United States from performing these life-changing stem cell procedures, the thousands of patients nationwide who have benefitted from this holistic therapy will be the last to do so, and subsequent treatments will return to offshore clinics. This will greatly reduce the number of patients who can afford these kinds of life-changing therapies and will force autologous, adipose stem cell treatments back into the dark ages. How are stem cells harvested and used to help improve quality of life?

Cells are harvested from the tissues in your body. They are then relocated to areas of inflammation or damage to help promote a healing response. The entire procedure is painless and simple, performed by highly skilled and trained physicians across the nation.

The David Knight ShowPublished on Apr 26, 2019Lori Gregory and Dr. Kristin Comella, world-renowned expert on regenerative medicine using a patient’s own stem cells join to talk about the federal government’s unprecedented attempt to regulate our bodies. This new treatment holds amazing potential, which is why government & industry want to control your body, your healthcare, your informed choice and your liberty.

TEDx TalksPublished on Jan 3, 2018Growing incidence of autoimmune diseases in our societies demands better understanding and treatment. Is there a role for regenerative therapies and if so, how do we discern and define this? What is safe? What is not safe? What brought me to my opinions and thus my approach to healing? My own story of evolution and growth, my own suffering with severe CNS Lyme Disease colored my reality with my patients. How can I then educate and heal more effectively? Dr. Shapiro received her undergraduate degree from George Washington University in 1981 and her Osteopathic Medical degree from Southeastern College of Medicine in 1987. She went on to complete an Internship at Brookdale Hospital in New York in June 1987. She completed a Physical Medicine & Rehabilitation residency at Albert Einstein College of Medicine in June 1992 also in New York. She completed an additional year as a Fellow in Pediatric Rehabilitation in 1993 at Albert Einstein College of Medicine. For the next two years she served as Associate Director of the Myofascial Pain Program and Director of Pediatric Rehabilitation at Danbury Hospital in Connecticut, an affiliate of Yale University Medical Center. During this time, she became Assistant Clinical Professor in the Departments of Physical Medicine & Rehabilitation and Pediatrics at Albert Einstein. She is currently Assistant Clinical Professor at Columbia University Medical Center in the Department of Rehabilitation and Regenerative Medicines.. Dr. Shapiro was Chair of the Myofascial Special Interest Group for the American Academy of Physical Medicine & Rehabilitation and has remained active in creating legislation regarding proper treatment and billing regulations for this entity. In January 1996, Dr. Shapiro opened a private practice in New York City. She has lectured widely on Musculoskeletal Pain Syndromes as well as autoimmune diseases associated with inflammatory conditions both nationally and internationally. Her greatest passion is problem solving in the field of chronic conditions and the application of regenerative therapies for such. She has appeared on FOX Cable network and Lifetime. Dr. Shapiro is also one of six contributors to the revision of Volume I of Travell & Simons’ text on Myofascial Pain & Dysfunction, published in 1999. She has worked on an independent workshop series on Musculoskeletal Pain Syndromes and remains an active participant in the international field of regenerative medicine, stem cell therapies and the treatment of chronic inflammatory conditions. This talk was given at a TEDx event using the TED conference format but independently organized by a local community. Learn more at - Jack Forbes1 year agoLike it overall. Where did you go to get your therapy??? I'm guessing outside of the u.s?? I have MS and it would have been nice to hear other countries that are advanced in this area. I'm pretty sure at some point with stem cells and nano technology they'll be curing a lot of people but highly doubtful it'll happen in the U.S.. so next time don't be afraid to say what countries are leading the way in this stuff because everyone in the U.S knows it's not us!! Which is sad we are the last major power that doesn't give it's people health care nor are we leading or even close to it in our care in America. Until you get sick and see what a scam the health care system is in this country you think you have it great. Ignorance is truly Bliss.﻿- Ce She1 year agoThank you Dr.R.Shapiro. It’s great that you’ve decided to publicly discuss your personal experience as well as educate us regarding amniotic fluid. I’m doing very very well after 4 treatments of amniotic injection on my degenerative Disc disorder (DDD) in my C5C6C7. Correcting & healing my Cervical DDD have helped alleviate me from neck arthritic pains as well as eliminated one of many triggers of my chronic migraine. More success to you in your endeavor. Your talent, and genuine interest in finding right remedies to help people are greatly appreciated. Salamat Po!Cecilia S. (68 yrs old)﻿-

Published on Dec 4, 2017Clemens van Blitterswijk doesn’t get weighed down with scientific jargon and details. He connects with the audience by using charisma and analogies to explain to us the future of regenerative medicine. Blitterswijk is a renowned name in the tissue engineering and regenerative medicine field due to his unique multidisciplinary approach. He is one of the most frequently cited Dutch scientists in Materials Sciences, the applicant and co-appli¬cant of over 100 patents and has co-founded multiple biomedical companies. Today, he combines his Professorship at Maastricht University with a Founding Partnership of the new LSP-Health Economics Fund (LSP-HEF) of the European healthcare investment group Life Sciences Partners (LSP). This talk was given at a TEDx event using the TED conference format but independently organized by a local community. Learn more at https://www.ted.com/tedxR M4 months agoI can't believe regeneration and ultrasound aren't the primary targets of all the charities in the world right now. If you can look inside and see a failing organ (cheaply!) and then replace/repair it, job done, everything is cured. Ok, some cancers and blood diseases would still be a problem, but the big killers would take a major hit, and you could eventually just print a new body and transplant the patient's brain. Instead we're focused on improving childhood mortality in third world countries and feeding the homeless, which, while these are noble efforts, they generate even more people to stand in line for dialysis. The poor and the homeless are not on track to become scientists and engineers who will solve the scarcity problem. They're going to still be having broods of starving children. Reversible voluntary male sterilization would be another valuable target, not feeding them (i.e., giving money to their dictator).﻿

Mass Producing Stem Cells: Manufacturing But Not As You Know It | Karen Coopman | TEDxLoughborough; 17:30 min.

TEDx TalksPublished on Aug 27, 2015Traditional drugs often don’t provide a cure but simply hide the symptoms of a disease or injury. Regenerative medicine overcomes this by replacing or regenerating cells, tissue or organs in order to help the body fix its self and regain normal function. In this way we have the potential to treat a wide range of different conditions from spinal cord injury through to diabetes. However, many of these treatments rely on us being able to grow large numbers of stem cells and that is easier said than done. Join Dr. Karen Coopman as she talks about how stem cell based therapies are actually made and some of the progress being made towards their mass production.With a background in pharmacology Karen has always had an interest in healthcare and in 2008 was appointed to a lectureship at Loughborough University within the Department of Chemical Engineering.The overarching theme of Karen’s research is the manufacture of cellular therapies. The ultimate aim is to generate a viable stem cell bioprocess such that clinically relevant cell numbers can be generated whilst ensuring product potency, purity and safety. Developing scalable systems for stem cell growth and improving methods of cell preservation are the current focus of the group. Outside of the University, Karen is also a member of the EPSRC Early Career Forum in Manufacturing Research, is on the Steering Group of the Bioprocessing Research Industry Club and is the meetings secretary for ESACT-UK, the UK Society for Cell Culture Biotechnology.- You wanna know how to mass produce stem cells for yourself....fasting. There a solution in 0.3 of a second.﻿

TEDx TalksPublished on Jul 17, 2013Una Riekstina is dedicating her life in the stem cell research. She got her PhD at Karolinska Institutet, in Stockholm. Currently she is Asoc. Professor and leading researcher at the Faculty of Medicine of University of Latvia. Una is a coauthor of 17 international research articles and 12 local research and popular science articles. She is a recipient of prestigious L'Oréal Latvia grant for Women in Science in year 2010. In her speech Una explains that adult stem cells are our body's natural resource that renews the body lifelong. Stem cell research helps to find out ways how to use stem cells to cure diseases like heart attack, diabetes, lost vision and autoimmune diseases. Adult stem cells are the medicines of tomorrow that will improve the quality of life for many people yet they are not the panacea for all diseases. - Castielle Winchester5 years agoI don't think her discovery alone is Nobel-worthy - she did give a good overview of the absolute basics of Stem Cell Biology, and some of the established facts that are usually taught to students of Regenerative Medicine. A Nobel-worthy discovery would be much more pivotal than her mere addition of one fact - that she has found a way to make the differential potential of adult stem cells better, almost as much as embryonic stem cells. ﻿

TEDx TalksPublished on May 18, 2013Dr. Aboody is an Associate Professor both in the Department of Neurosciences and Division of Neurosurgery at City of Hope. Her research focuses on using stem cells to treat cancer, brain tumors in particular. She founded biotech company TheraBiologics, inc., which develops "cancer targeted drug delivery," to use entrepreneurship as a means by which to overcome the barriers to scientific progress. -

TEDx TalksPublished on Apr 25, 2012Our theme for TEDxDelMar 2011 was "A Search For A Cure". In this video, Dr. Sander gives us her talk entitled "From Stem Cells to Beta Cells".-