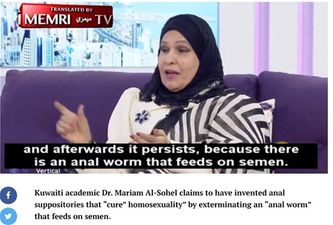 In a clip taken from Kuwaiti television and translated by MEMRI-TV, Al-Sohel claims that her product ‘cures sexual urges’ of gay men and “butch lesbians”.

1,909 people are talking about this

Another woman on the panel responded to this revelation with the words, “Praise be to Allah”.

The suppository works by “exterminating the worm that feeds on sperm,” according to Al-Sohel.

Dr. Al-Sohel is confident that in combination with a balanced diet the treatment works and is “prophetic medicine” in line with the Koran.

“This is all science, so there is nothing to be ashamed of,” says Al-Sohel.

All we can say is; Some cultures are better than others.