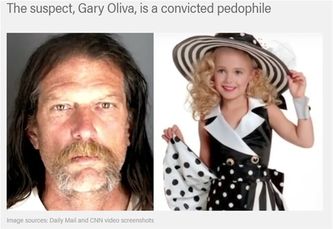 The suspect, Gary Oliva, is a convicted pedophile

Gary Oliva, a convicted pedophile who has long been suspected of being involved in the murder of then-six-year-old JonBenét Ramsey, confessed to the murder in letters to a high school classmate, according to the Daily Mail.

Ditch the fake news ==> Click here to get news you can trust sent right to your inbox. It's free!

Oliva is currently in prison serving a 10-year sentence for child pornography. He said in letters to Michael Vail that he accidentally killed Ramsey.

"I never loved anyone like I did JonBenét and yet I let her slip and her head bashed in half and I watched her die," Oliva wrote in one of the letters. "It was an accident. Please believe me. She was not like the other kids."

Ramsey was found dead in her Boulder, Colorado, home on Dec. 26, 1996. Police believe she was killed the night before by a blow to the head or strangulation. Nobody has ever been charged in the case, which received national attention.

Vail and Oliva's history: Vail said Oliva, a friend from high school, called him on Dec. 26, 1996 crying saying "I hurt a little girl." Vail said he could not get more information from Oliva besides where he was living at the time.

The next day, Vail said he read in the newspaper that a 6-year-old girl had been killed in Boulder, so he called the police and told them what Oliva had said, although police never followed up with him about it.

Vail said he continued to communicate with Oliva despite his criminal history because he hoped Oliva would eventually admit to killing Ramsey.

"JonBenét completely changed me and removed all evil from me," Oliva wrote to Vail in another letter. "Just one look at her beautiful face, her glowing skin, and her divine God-body, I realized I was wrong to kill other kids. Yet by accident she died and it was my fault."

Oliva claimed in his letters that he was a "serial murderer" and that he "told the detectives all the murders I can remember," although he said police were unable to prove any of them.

The letters Oliva sent to Vail have been given to Boulder police, and Vail hopes the information is enough to charge Oliva.

"I am begging Gary to do the right thing and reveal everything he knows," Vail told the Daily Mail. "He may also be able to name people he was possibly involved with when he broke into JonBenét's home. They need to face justice as well."

Oliva's criminal convictions: In addition to child pornography, Oliva has been convicted of sexually molesting a 7-year-old girl and assaulting his mother by strangling her with a telephone cord.

At the time of Ramsey's death, Oliva lived about 10 blocks away from the Ramsey family. Investigators have theorized that Oliva and several other men were involved in breaking in to the Ramsey home. Oliva was a registered sex offender at the time.

Oliva is eligible for parole in October 2020.

Pope Francis has compared the sexual abuse of children to human sacrifice.

“I am reminded of the cruel religious practice, once widespread in certain cultures, of sacrificing human beings – frequently children – in pagan rites,” Francis said Sunday.

He was speaking at the close of the summit of the church’s top bishops and leaders, called to design a plan on how to deal with the predatory priests who have sexually abused children and adults for decades.

AFP, the French news agency, reports that the bishops were given a “roadmap” on how to stop the predatory priests that included “drawing up mandatory codes of conduct for priests, training people to spot abuse, and informing police.”

Mark Coleridge, president of the Australian Catholic Bishops Conference warned the gathered Catholic clergy and leaders that “We do not have forever, and we dare not fail” as they go back to their dioceses and navigate dealing with reports of abuse.

“We have shown too little mercy,” Coleridge warned, “and therefore we will receive the same.”

The reports of worldwide sexual abuse by priests have rocked the Roman Catholic Church.

“We will do all in our power to make sure that the horrors of the past are not repeated,” Coleridge said.

On Saturday, German Cardinal Reinhard Marx, in an extraordinary admission, said that “files that could have documented the terrible deeds and named those responsible were destroyed, or not even created.”

Sister Veronica Openibo, a Nigerian nun, addressed the group Saturday: “We must acknowledge that our mediocrity, hypocrisy and complacency have brought us to this disgraceful and scandalous place we find ourselves as a Church. We pause to pray, Lord have mercy on us.”

She told the summit; “Too often we want to keep silent until the storm has passed. This storm will not pass by. Our credibility is at stake.”

Comedian Sacha Baron Cohen accidentally exposed an elite pedophile ring during filming for his Who Is America? series after a concierge at a hotel in Las Vegas who worked for politicians and billionaires admitted that he had a contact who procured children.

While playing an Italian playboy character called Gio Monaldo, Cohen convinced a concierge at a hotel to help him procure an underage boy to molest.

“We wanted to investigate how does someone like Harvey Weinstein gets away with doing what…get away with criminality, essentially. And the network that surrounds him. We decided that Gio would interview a concierge in Las Vegas,” said Cohen.

While in character, Gio told the concierge that he had molested an 8-year-old boy.

“This guy starts advising Gio how to get rid of this issue. We even at one point talk about murdering the boy, and the concierge is just saying, ‘well, listen, I’m really sorry. In this country, we can’t just drown the boy. This is America we don’t do that,’” said Cohen.

The concierge then offered to put Gio in touch with a lawyer who could help “silence” the boy, before Cohen then quizzed the man on how he could get a date for the night.

“He says, ‘what do you mean, a date?’ I go, you know, like a young man. He says, ‘well, what kind of age?’ I say, lower than Bar Mitzvah but older than eight. And he says, ‘yeah, I can put you in touch with somebody who can get you some boys like that.’”

Instead of airing the segment, Cohen immediately handed the footage to the FBI, “because we thought, perhaps there’s a pedophile ring in Las Vegas that’s operating for these very wealthy men. And this concierge had said that he’d worked for politicians and various billionaires.”

Cohen said that the FBI did not pursue the tip.

As we have repeatedly exposed (and been slandered by the media for doing so), in virtually every country where pedophile rings are busted, a connection to the elite and political class eventually emerges.

The Trump administration has vowed to make tackling human trafficking a priority and numerous large pedo rings have been broken up since he took office.

Pedos are the norm for Governments and Religion.

Politicians are pedophiles, they call their sex toys page boys. Christian priests call them altar boys. Muslims have them, too. Every town in world has them. Oh, and church school teachers, too. They are the worst, just can't leave you alone. Very embarrassing when they oogle you in front of entire classroom.

Now we know why the left embrases the Muslim Culture and floods the EU with Millions of them with open arms. Mohammed followers have been engaging is this for a long long time.

Mystery & DiscoveryPremiered Jan 6, 2019David Icke 2019 latest update videos everyday to everyone!David Vaughan Icke (born 29 April 1952), formerly a footballer and sports broadcaster, is an English writer, public speaker, and a professional conspiracy theorist. David Icke is the author of over 20 books and numerous DVDs, and has lectured in over 25 countries.This video made for those who have missed this David Icke 2019 content part above. And his fans.We love David Icke very much, please this video!Thank you so much and thank for watching!SHARE & SUBCRIBE if you enjoy this video!