‘Grant me 5 minutes in a locked room with this demon!’ father says at sentencing for disgraced Olympic doctor

The father of three daughters sexually abused by a former sports doctor lunged toward the perpetrator Friday during an appearance in court.

Larry Nassar, a former Michigan State University and USA Gymnastics national team doctor who abused more than 150 girls and women during his career, was rushed by Randall Margraves during sentencing in Michigan.

Margraves, who had just finished listening to two of his daughters address the court, began asking the judge for “5 minutes in a locked room” with Nassar moments before the incident began.

“I would ask you to as part of the sentencing to grant me 5 minutes in a locked room with this demon!” Margraves asked the judge.

After being denied his request, Margraves continued by asking instead for “1 minute” alone with the disgraced physician.

The distraught father then ran towards the former doctor before being blocked by Nassar’s attorney and tackled by numerous deputies.

While being restrained on the ground, Margraves was heard repeatedly pleading with the court.

“Give me one minute with that bastard!” the father said while being handcuffed.

The judge declined to charge Margraves and resumed the hearing shortly after.

The hearing, Nassar’s second sentencing, comes less than two weeks after the ex-doctor was given up to 175 year in prison.

In a letter to the court, Nassar defended his sexual assaults by claiming that his “treatments worked.”

“Those patients that are now speaking out were the same ones that praised and came back over and over and referred family and friends to see me,” Nassar wrote in the letter.

MLivePublished on Feb 2, 2018Randall Margraves, father of three victims, is tackled by Eaton County Sheriff deputies as he tries to attack Larry Nassar during the second day of his sentencing at the Eaton County Courthouse in Charolette, Mich. on Feb. 2, 2018. (Joel Bissell | MLive.com)Brian M2 hours agoIncredible Dad, my heart breaks for him and his paid. Wish the cops would of let him get a couple of swings in first. Hope his fam starts a go fund me page I will happily contribute to pay his fine.﻿Raffy Things4 hours agothey should let the father’s or mothers of the victims let them have 5 minutes with him alone but trust me he will have hundreds & thousands of minutes with inmates that will treat him very nice.﻿Roua Al4 hours agoThis monster does not need to have three meals a day and a bed to sleep on! He deserves to die. GET RID OF HIM!﻿Jim H.4 hours agoThe part that really got to me was when the judge started yelling at the poor man. "I understand your frustration, but you cannot do this. This is not helping your children, this is not helping your community, this is not helping us, this is not helping the police dept." Anthony Napolitano4 hours agoFather of the YEAR!﻿Rolue Vas Reisa4 hours ago (edited)I'm waiting for the next CNN news report to twist this around against white men. Yet again. Showing how all white men are evil savage barbarians that need to be killed like animalsJust you wait. They will twist this around and once again all white men will be blamed, treated as rapists and violent barbarians. I only hope some people actually watch this video before the fake news starts trying to brainwash people﻿Paul Page4 hours ago"Civility" ran out the window when Michigan State University continued to allow Larry Nassar to continue his medical practice on these young girls. Me personally, I would like to be allowed 5 minutes in a room with Tom Izzo and Mark Dantonio for their roles in the cover up of sexual abuses among their football and basketball players.﻿Anne Mattocks3 hours agoGood Daddy!!! I wish someone would have protected me.I’m sorry for his daughters and all the victims﻿Paul Page4 hours agoDad just did what many of the victim's parents were thinking in their brains and feeling in their hearts. Good for the father. Yes, the court officers had to restrain him. But I bet many of the court officers who had to subdue the father sympathized with him. And as far as Nassar's criminal defense lawyer Shannon Smith goes. She reminds me of the Al Pacino movie The Devil's Advocate.﻿ 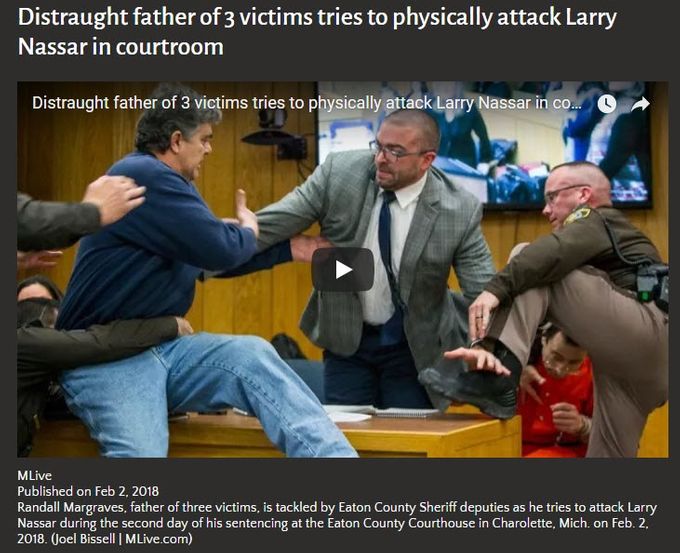 The father of three daughters sexually abused by a former sports doctor lunged toward the perpetrator Friday during an appearance in court. Larry Nassar, a former Michigan State University and USA Gymnastics national team doctor who abused more than 150 girls and women during his career, was rushed by Randall Margraves during sentencing in Michigan.