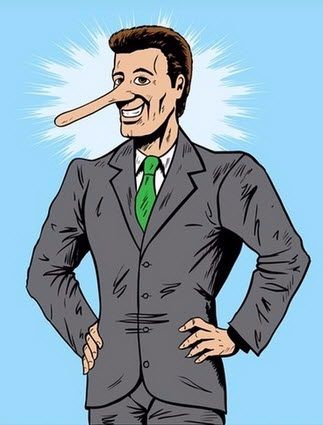 Ways to Tell If Someone's Lying

Former CIA officers Philip Houston, Michael Floyd, and Susan Carnicero distilled their professional deception-detecting skills into a fascinating book, Spy the Lie, now available in paperback. In the excerpt below, the authors reveal six telltale signs someone is lying.

1. Behavioral pause or delayYou ask a person a question and you initially get nothing. After a delay, he begins to respond. How long does a delay have to be before it’s meaningful, before you would consider it a deceptive indicator? Well, it depends.

Try this exercise on a friend: Ask her the question, “On this date seven years ago, what were you doing that day?” The person will invariably pause before responding, because it’s not a question that naturally evokes an immediate response—the person has to think about it, and likely still won’t be able to offer a meaningful response. Now ask her, “On this date seven years ago, did you rob a gas station?” If your friend pauses before responding, you probably need to choose your friends more carefully. Much more likely, there will be no pause—your friend will immediately respond, “No!” or “Of course not!” It’s a simple exercise, but it drives home the point that the delay needs to be considered in the context of whether it’s appropriate for the question.

2. Verbal/non-verbal disconnectOur brains are wired in a way that causes our verbal and nonverbal behaviors to naturally match up. So when there’s a disconnect, we consider that a potential deceptive indicator.

A common verbal/nonverbal disconnect to watch out for occurs when a person nods affirmatively while saying, “No,” or turns his head from side to side while saying, “Yes.” As an exercise, if you were to perform that mismatch in response to a question, you’d find that you really have to force yourself through the motion. Yet, a deceptive person will potentially do it without even thinking about it.

There are a couple of caveats associated with this particular indicator. First, this indicator is only applicable in a narrative response, not in a one-word or short-phrase response. Consider, for example, that a person’s head might make a sharp nodding motion when he says “No!” That’s not a disconnect; it’s simple emphasis. Second, it’s important to keep in mind that in some cultures, a nodding motion doesn’t mean “yes,” and a side-to-side head motion doesn’t mean “no.”

3. Hiding the mouth or eyesA deceptive person will often hide her mouth or eyes when she’s being untruthful. There is a natural tendency to want to cover over a lie, so if a person’s hand goes in front of her mouth while she’s responding to a question, that’s significant. Similarly, there’s a natural inclination to shield oneself from the reaction of those who are being lied to. If a person shields her eyes while she’s responding to a question, what she might well be indicating, on a subconscious level, is that she can’t bear to see the reaction to the whopper she’s telling. This shielding may be accomplished with a hand, or the person might even close her eyes. We’re not referring to blinking here, but if a person closes her eyes while responding to a question that does not require reflection to answer, we consider that a means of hiding the eyes, and a likely deceptive indicator.

4. 4. Throat-clearing or swallowingIf a person clears his throat or performs a significant swallow prior to answering the question, that’s a potential problem. If he does it after he answers, that doesn’t bother us. But if he does it before he answers, a couple of things might be happening. He might be doing the nonverbal equivalent of the verbal “I swear to God…”—dressing up the lie in its Sunday best before presenting it to us. Or physiologically, the question might have created a spike in anxiety, which can cause discomfort or dryness in the mouth and throat.

5. Hand-to-face activityBe on the lookout for anything a person does with his face or in the head region in response to your question. This often takes the form of biting or licking the lips, or pulling on the lips or ears. The reason goes back to simple high school science. You’ve asked a question, and the question creates a spike in anxiety because a truthful response would be incriminating. That, in turn, triggers the autonomic nervous system to go to work to dissipate the anxiety, draining blood from the surfaces of the face, the ears, and the extremities—which can create a sensation of cold or itchiness. Without the person even realizing it, his hands are drawn to those areas, or there’s a wringing or rubbing of the hands. Boom!—you’ve spotted a deceptive indicator.

6. Grooming gesturesAnother way that some people may dissipate anxiety is through physical activity in the form of grooming oneself or the immediate surroundings.

When responding to a question, a deceptive man might adjust his tie or shirt cuffs, or maybe his glasses. An untruthful woman might move a few strands of hair behind her ear, or straighten her skirt. We’re also concerned with sweat management. That a person might be sweating doesn’t bother us, but if he takes out his handkerchief (or, perhaps more likely, a hand sans kerchief) and wipes the sweat off his brow when responding to a question, that’s significant. Tidying up the surroundings is another form of grooming gesture. You ask a question, and suddenly the phone isn’t turned the right way, the glass of water is too close, or the pencil isn’t in the right place.

Excerpted from SPY THE LIE: Former CIA Officers Teach You How to Detect Deception. Copyright © 2012 by Philip Houston, Michael Floyd, Susan Carnicero, and Don Tennant. All rights reserved. Reprinted with permission of Griffin, an imprint of St. Martin’s Press.